Dingle, also referred to as The Dingle by Edmund McMillen, is an enemy in The Binding of Isaac: Rebirth that is present as both a boss on The Basement, The Cellar, and The Catacombs (Double Trouble) floors and as an enemy in Boss Challenge Rooms and on later floors.

Dingle behaves much like Gurdy and Gurdy Jr. Dingle's attacks are as follows:

Concept art of Dingle from Ed's blog post (as mentioned above)

Squirt, an enemy based off of Dingle. 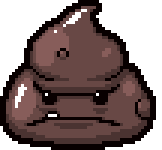 Dinga, another enemy based off of Dingle.

Dingle in the Versus screen.

Teaser of Dingle
Add a photo to this gallery
Retrieved from "https://the-boi-rebirth.fandom.com/wiki/Dingle?oldid=6219"
Community content is available under CC-BY-SA unless otherwise noted.